Home Storage Gold IRA: Is It Worth the Risk?

The economic uncertainties are driving the popularity of Precious Metals IRA, specifically Gold IRA. Taking advantage of this trend, many gold dealers are running advertisements in the media offering ‘Home Storage Gold IRA’.

This is confusing the minds of investors. Is it even legal?

Let us do some fact check. 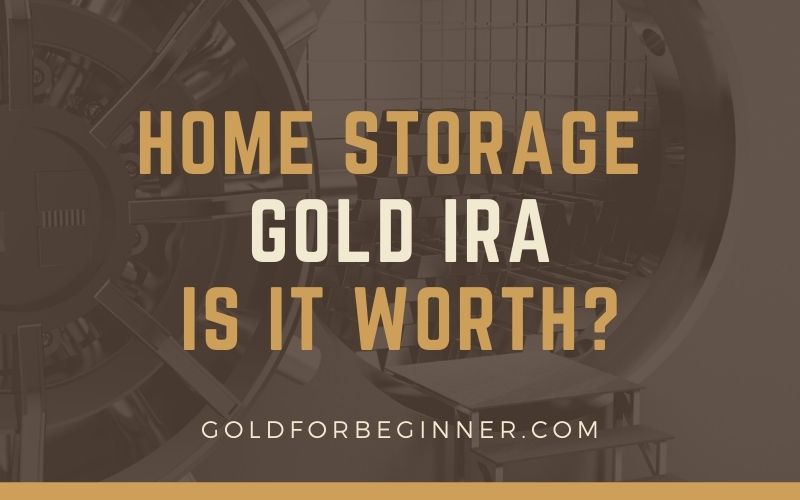 What the IRS says about Gold IRA?

“For purposes of this subsection, the term “collectible” shall not include—

(iv) a coin issued under the laws of any State, or

(B) any gold, silver, platinum, or palladium bullion of a fineness equal to or exceeding the minimum fineness that a contract market (as described in section 5 of the Commodity Exchange Act, 7 U.S.C. 7) requires for metals which may be delivered in satisfaction of a regulated futures contract,

if such bullion is in the physical possession of a trustee described under subsection (a) of this section.”

There is no ambiguity in this matter.

More clarifications from the ICTA and the IRS

In addition to this, the Industry Council for Tangible Assets (ICTA), the national trade association for all who have an interest in precious metals and collectibles, issued a white paper on the topic of ‘Home Storage’ Gold IRA. It says with clarity that IRA-owned precious metal assets must be held in the ‘physical possession’ of a U.S. financial institution or an IRS-certified nonbank custodian, and not at home or in one’s own physical custody.

As more and more advertisements and mailers started spreading false information among investors resulting in confusion, the Internal Revenue Service has made it very clear with this –

“Gold and other bullion are “collectibles” under the IRA statutes, and the law discourages the holding of collectibles in IRAs. There is an exception for certain highly refined bullion provided it is in the physical custody of a bank or an IRS-approved nonbank trustee. This rule also applies to an indirect acquisition, such as having an IRA-owned Limited Liability Company (LLC) buy the bullion. IRA investments in other unconventional assets, such as closely held companies and real estate, run the risk of disqualifying the IRA because of the prohibited transaction rules against self-dealing.”

So, what are the ads about?

The ‘Home Storage Gold IRA’ is touted as a shortcut and money-saver by such advertisements. It is also known as ‘Checkbook IRA’ or IRA LLC.

To qualify for a Home Storage Gold IRA, the Internal Revenue Service has set stringent requirements.

And there are more.

If you satisfy all the conditions laid down by the Internal Revenue Service for Home Storage Gold IRA, you must submit a written application to the IRS demonstrating your qualifications. The applicant must be able to prove with satisfaction that all the regulations and requirements as specified by the IRS are met. Such as fiduciary ability and experience and capacity to account and handle the funds.

Only if your application is approved by the Internal Revenue Service, you can go forward with the Home Storage Gold IRA.

What is the catch?

Having a Home Storage Gold IRA raises a red flag with the Internal Revenue Service. You are subject to more scrutiny and auditing to spot violations of any kind. Even a small mistake, intentional or otherwise, can result in all your funds in the Home Storage Gold IRA being treated as a distribution. This will negate its tax-deferred status. The Internal Revenue Service can even demand back taxes from the date of opening the IRA. On top of this, if you are aged 59½ or less, you may have to pay the 10% early withdrawal penalty.

Even without all this, a Home Storage Gold IRA requires you to manage your funds without any professional help. And, the safe storage of the assets is another headache you have to deal with.

Why such strict guidelines for Home Storage IRA?

Allowing personal control over the retirement funds and assets can have drastic consequences. Foreseeing these situations, the U.S. government has imposed the arrangement of a trustee for an IRA.

The role of an independent trustee is to ensure that the funds and assets are actually in existence and held in the account. And, to make sure that the rules and regulations laid down by the IRS are being followed. A trustee is also required to report all distributions made from the account.

In the case of a Home Storage Gold IRA, the account owner also being the trustee of the funds and assets of the retirement account will have a tough time convincing the Internal Revenue Service about their existence.

Has the IRS certified home storage of IRA assets?

Not exactly. Those who want to use this route to avoid having a manager and a depository are exploiting a loophole in the law. The Internal Revenue Service has not certified the home storage arrangement of IRA assets explicitly anywhere. In fact, it has issued statements saying this arrangement is not legal and hence not allowed.

However, no concrete action has been taken by the IRS against such advertisements, and those misrepresenting the rules to their advantage. The reason for this is simple. Tax compliance and law enforcement are voluntary in the United States. The Internal Revenue Service has issued guidelines and expects taxpayers to follow them.

Is there any other choice for storing IRA assets?

Whether this arrangement is legally compliant or not is still not clear. The IRS has not officially issued any statement in this regard. Until the IRS specifically approves banks and bank safety deposit boxes as custodians and storage facilities for the assets in a Precious Metals IRA, it will remain in the legal gray area.

If you want to pursue this option to store your IRA holdings, you may have to take help from the law to ensure legal compliance. In this effort to comply with the law, you most probably will end up spending more than what you would have spent on a standard Gold IRA.

Is it worth the effort to circumvent the custodian-depository arrangement of a regular Precious Metals IRA? The simple answer would be no.

The Home Storage Gold IRA has never been approved by the IRS and on many occasions, the IRS has issued warnings against misusing certain provisions in the IRC. Ignoring such warnings and going ahead with it is not advisable, especially as it will entail intense IRS scrutiny and audit.

The safety deposit box option is again a tricky proposition due to many reasons. Inadvertently taking personal possession of the assets, failure to store the assets properly or failure to comply with any of its other provisions may trigger huge taxes and penalties. Again, you may expect stricter scrutiny from the IRS.

If you are considering such options, it is better to stay clear of them. If you have already taken the plunge, do your best to get out of it.